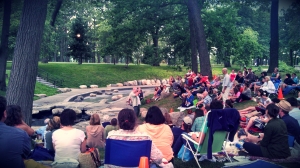 Quick refresher of what your high school English teacher taught you.  Shakespeare’s plays were performed in daylight.  The common folk attended the plays and spent much of the performance eating, drinking, talking, and waiting for one of the Great Bard’s dirty jokes — of which there were always plenty.  In Elizabethan England high theater would have looked pretty low to us.

That is to say, William Shakespeare did not write his plays for grey-haired scholars to quibble over.  Nay, he wrote them to entertain and move the people.

I was reminded of this last night as I experienced Romeo and Juliet in Portland’s Deering Oaks Park.  The production is being put on by Fenix Theatre Co., and it is everything good about Shakespeare: entertaining, fast-paced, bawdy, and high-minded.

When — not if — you go to this production, be ready to have the actors swarm the crowd as they perform their lines.  Romeo crawls through the audience moving from one side of the outdoor theater to the other during the famous balcony scene.  Mercutio holds a cell phone up to an audience member as he leaves a message for Romeo.  A cell phone?  Yup, a cell phone.

To say the fourth wall is broken in this performance is a vast understatement.  There are no walls here.

The outdoor setting and the use of the crowd-as-prop might be distracting in some productions, but the acting in this play is magnetic.

Peter Brown and Karen Ball in the roles of Lord and Lady Capulet are a dysfunctional force as Juliet’s parents.

Tybalt is given combustible gravitas by Matt Delamater as a single-minded powerhouse whose raison d’etre is to kill Montagues.

Nate Houran’s Romeo is at once a pathetic romantic and a forceful murderer (the lover directly kills two characters), while Karin Baard hits the right pitch as a young Juliet — the audience should remember “She hath not seen the change of fourteen years.”

And Ian Alan Carlsen gave an absolutely standout performance last night as Mercutio.  The literary critic Harold Bloom argues that Shakespeare had to kill Mercutio for fear that he would take over the story of the star-crossed lovers, and last night, Carlsen showed us why.

There were three scenes that gave me straight up chills.

The fight scene where Mercutio and Tybalt die was so passionately acted and so perfectly choreographed that it felt down-right real.

And the scene of domestic violence where Peter Brown’s Lord Capulet manhandles his wife and daughter in a fit of rage brought on by Juliet’s refusal to marry Count Paris was shocking.  In the best possible way.

The play, though true to Shakespeare’s old English, is wildly accessible to adults and kids alike.

Here’s my suggestion, grab your favorite lawn chair, pack some food and a bottle of wine, and head to Deering Oaks Park to watch Romeo and Juliet in a way that Shakespeare himself would appreciate.