This summer SportsCenter has spent more time analyzing the fallout of A-Rod’s turbulent relationship with Biogenesis, than it has showing actual highlights of baseball games.  So much air-time is given to analysis of which players he outed, how long the appeal of his 211 game suspension will take, and his newest douchery, a malpractice suit against a Yankees’ team doctor.

And if it’s not A-Rod’s drama taking away from the games happening on the field, it’s reports of Ryan Braun playing a bogus anti-Semite card to protect his 2011 MVP award.  Shame on you, sir.

I thought the Mitchell Report took care of this nonsense.  Didn’t Rafael Palmeiro, Mark McGwire, and Roger Clemens show us the ugly fallout of taking PED’s?

Guess not.  Humans, being human, we are destined to repeat our fathers’ mistakes.

With all this off the field, I need to remind myself that baseball is thriving in 2013.  There’s a lot of good out there.

Here are five reasons to still believe in baseball.

1.  The Pittsburgh Pirates are in first place.  For a while, it seemed like the Pirates were the worst team in professional sports on the planet with one of the nicest facilities.  Now they’re a kick ass team in a kick ass facility.  The three-way race in the NL Central alone is reason enough to pay attention to baseball.

2. The young talent in the game is astonishing.  Bryce Harper is the most electrifying twenty-year-old home run hitter since Ken Griffey, Jr.  Also born in 1992, Jose Fernandez packs the usually empty Marlins stadium with his spellbinding stuff.  The Dodger’s phenom Yasiel Puig is hitting .342 and makes a top-ten play nightly.  And leading the voltaic group of MLB youngsters is last year’s AL Rookie of the Year, Mike Trout, who spoke out against the use of PED’s, calling for a lifetime ban if a player tests positive.

Thanks, Mike, for leading your generation with raw, God-given talent and a level head. 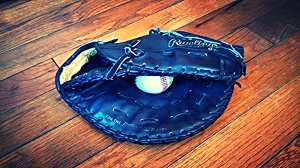 3. Miguel Cabrera.  Enough said.  He’s the type of player you’ll tell your kids about.  The same way my dad told me about watching Yastrzemski play.  I know he’s had a few off-the-field hiccups, but he’s seemed to have quieted that down.  I saw him tag Mariano Rivera two nights in a row earlier this season for ninth inning homers.  If he can catch Chris Davis in home runs, he might win another triple crown.  Do you know how monumental that is?

4. And speaking of Mariano Rivera, here’s one of the all-time greats going out with class.  His tour around big league ball parks is unprecedented.  While A-Rod pulls his ego-maniacal shenanigans at one end of the Yankee club house, at the other end is a humble future Hall of Famer doing it right.

5. And finally, Clayton Kershaw’s curveball.  It makes my knees buckle from my couch.  It’s pure poetry.

It’s important to remember that baseball is still baseball.  At its core, it’s sacred.  It’s still about hitting a round ball with a round bat.

If we can quiet the noise of the A-Rods and Ryan Brauns and watch the games being played on the field, we might just understand how good we have it right now.